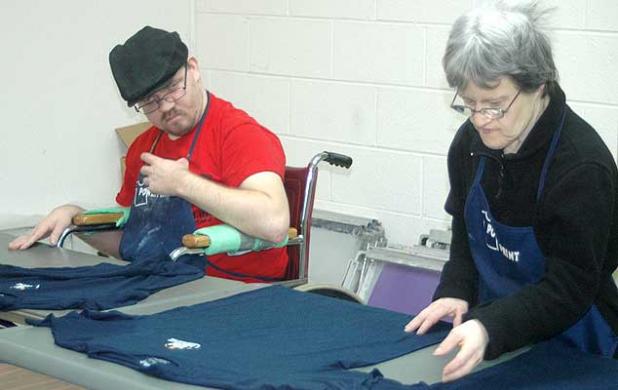 DUNCAN - Even with a Department of Human Services budget cut of 3.5 percent this fiscal year, Ability First Inc. is moving forward with growth and expansion plans.

"There were several reasons that we all agreed it was a great idea," said Robin Arter, executive director. "The first one was economics and financially, how it was less overhead if we merged into one company rather than two. Duncan Group Homes had only done residential services. We opened in 1982. The Power Shop opened in 1980 as primarily a vocation provider."

The two organizations already had a good working relationship. Clients who lived in the group homes went to the Power Shop for vocational services, and they also joined for recreational activities. The merger went surprisingly well, Arter said.

"It has taken us all some time to get used to saying 'Ability First.' We had a lot of Duncan Group Homes and Power Shop employees. Ability First, we thought that's a motto, too. It takes a while to change your name with the IRS, the State Department  just getting it in your mind and saying the name right when you answer the phone," Arter said and laughed.

The organization enjoyed a growth spurt about five years ago when Duncan Group Homes took over Hope Community Services in Ardmore.

"Hope dissolved and they came in," Arter said. "We have an office in Ardmore and we also service people in Norman. We go to Madill, Marietta, Burneyville. We serve families in Lone Grove, all around Ardmore, Waurika, Comanche, Goldsby, Washington and Lexington. Here in Duncan is where we have our biggest service area."

Ability First supports 93 individuals with developmental disabilities in the Ardmore, Duncan and Norman areas, and it employs 153 people.

The most trying portion of the merger has probably been administratively.

"Of course, we've had some growing pains to merge policy and procedures," Arter said. "While we all operate under the same standards that the state had, we all implemented them somewhat differently. We are still working on getting our procedures where we are doing things the same way. If an employee transfers from Duncan into our Ardmore office, it shouldn't be like moving to a different company. We're spending a lot of time procedurally right now."

She said one thing that helped the company through the 3.5 percent budget cut this year was health insurance through Insure Oklahoma. With the increase in eligibility to organizations with up to 200 employees, Ability First was able to offer three choices and three different levels of insurance coverage for its employees.

They serve individuals with IQs of 70 or less, those who have developmental disabilities that occurred during the developmental years, from birth to age 21. Families contact Ability First for support. If an individual is new to the system, representatives take 30 days to do assessments. They carry out independent living skills assessments and vocational assessments and personal interest.

Ability First's goal is to expand its vocational programs. It has two litter crews, one working in Stephens County and one in Comanche County. Individuals arrive for work in the morning, pick up their supplies, safety vests and all their safety equipment. Then they are taken by van to the highways to pick up trash. Job coaches accompany them each day.

"We have some janitorial crews," Arter said. "We have several churches in town that we do janitorial jobs for. We are interested in expanding our janitorial services. We're proud that we just got the contract with the municipal court here in Duncan. We clean the courthouse twice a week."

Future plans include expanding the T-shirt shop to include a small retail shop. Power Print has not changed its name with the merger, but remains a work experience program offered by Ability First. Work is also in progress for an adult day care service that will open sometime early next year.

"Then we hope to expand to maybe a used furniture store," Arter said. "We're really looking at vocational options to get vocational training and experience. We have someone placed at Ace Hardware. There's a job coach that works with him and supports him intermittently now. We also have two people working at McDonald's."